The Red-breasted Geese are well-known for their incredible beauty! These small natural pieces of art are also known for being endangered as species and for being the the smallest representative of the Geese family.

According to the latest scientific data the population of the Red-breasted Geese is not more than 50-60 000 specimen. This bird is under the legal protection of many national and international regulations and is listed in the IUCN Red list in the category Endangered

The Red Breasted Goose in Bulgaria

Bulgaria  bears the great responsibility for the survival of this species as more than 80% of the world population of the Red-breasted Geese spends the winter on its territory, especially in the colder winters. 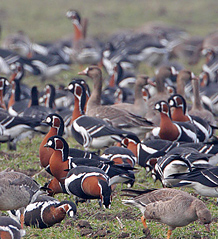 The basic threats of Red-breasted Geese are poaching, disturbance, loss of habitats and loss of feeding grounds.

For sure among the biggest threats for the Red-breasted Geese is poaching. Although the species is forbidden for hunting in most countries in which it has been observed, there are still cases of directly killed geese. The Red-breasted geese fly in mixed flocks with the Greater White-fronted Geese and often become victims of the hunters which shoot at the flocks.

Undoubtedly the biggest problem is disturbance. When hunting grounds coincide with  the wintering grounds of the geese, the birds are extremely stressed.

The work of Green Balkans NGO related to the Red-breasted Geese is focused mainly on the conservation of the species and its wintering habitats – foraging and roosting areas. The aim is to establish a “safety zone”, where the birds can roost and feed undisturbed, and where no poaching is possible.

More than 100 ha have been purchased in the region of Coastal Dobrudzha with the financial support of EECONET Action Fund and EURONATUR, Frankfurt Zoological Society, and the Committee Against Bird Slaughter, so that the species’ wintering habitats could be preserved;

Materials and expertise needed for the treatment and recovery of Red-breasted Geese in distress have been secured as part of the activity of the Wildlife Rehabilitation and Breeding Center;

Monitoring is implemented around the reservoirs and the adjacent territories of significance for the wintering of the Red-breasted Geese;

Various information and educational activities as well as activities for prevention of poaching are realized;

Various information and educational materials have been issued

A colony of nesting birds on Lake Durankulak was destroyed