Three species of cetaceans are found in the Black Sea. Our sea is semi-closed and isolated, which is the reason they have evolved as endemic subspecies – The Black Sea bottlenose dolphin (Tursiops truncatus ponticus), the Black Sea Harbour porpoise (Phocoena phocoena relicta) and the Black Sea common dolphin (Delphinus delphis ponticus).

Threats to the Black Sea cetaceans

The Black Sea cetaceans have been subject to industrial whaling in the past and it is considered that during the first half of 20th century about 4-5 millions of individuals have been caught. Moratorium on whaling was announced first in USSR, Bulgaria and Romania in 1966 and in 1983 Turkey also joined the ban. Currently, the number of cetaceans in the Black Sea is considered to be within the limit of 200 and 400 000 individuals in total for all three species. The fact that they are on the top of the food chain defines them as an important indicator about the state of the Black Sea ecosystem. They are protected under the national legislation and several international agreements because of the limited territory they inhabit and their limited numbers. 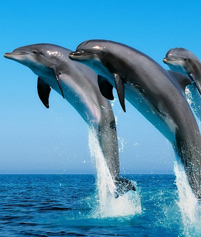 After the announcement of the common moratorium, a quick restoration of the populations was not achieved because of several factors. On one hand, the cetaceans are slowly reproducing species due to the fact that they reach maturity at older age and the long period of care for the offspring. On the other hand, some new threats are identified, causing negative impact on these species. Currently, among the main threats are the bycatch in fishing nets (mainly bottom set turbot nets) – most often harbour porpoises and rarely bottlenose dolphins are caught, the pollution of the Black Sea with heavy metals, persistent organic pollutants, marine litter, invasive alien species – comb jellyfish (Mnemiopsis leidyi) caused significant collapse in the anchovy population – main food resource for the common dolphin, the overfishing and the decrease of fish stock in the Black Sea; noise pollution – military sonars, seismic surveys for petrol/gas, dredging of the bottom, pipes/cables laying, tourist boats.

Our dolphin research and conservation program started in 2005. The work of Green Balkans is mainly focused at the following directions – researches, capacity building and public awareness activities.
More information about the separate directions you may read in the section Activities of Green Balkans

In year 2013 our organization became the first institution in Bulgaria that gained the status of ACCOBAMS Partner (ACCOBAMS is the Agreement on the Conservation of Cetaceans in The Mediterranean Sea, Black Sea and the Contiguous Atlantic Area).

Report your cetacean sightings or strandings!

How can you help