The Griffon Vulture (Gyps fulvus) is a large, carrion-eating bird. The European population is estimated at 32,400-34,400 pairs, which equates to 64,800-68,800 mature individuals (BirdLife International 2015). Approximately 10% of the global range for this species falls within Europe.

The Griffon Vulture was selected as a target species due to its high conservation status, the fact that it is a beautiful and magnificent bird, the fact that it brings extreme economic and ecological benefits, little known by the wide public. The threats for the species are fairly manageable and can be handled through awareness raising.

It disappeared at the middle of the 20th century, after 1970 it returned to the Eastern Rhodopes along the Arda River between the city of Kardzhali and the villages of Madzharovo: 1 breeding pair in 1978, until 1985 there were 1-4 nests, in 2005 there were 36 nests. It wanders in Southern Bulgaria and migrates along the Black Sea coast (3- 5 individuals) and the Sofia field.

The species is severely affected by poisoning, illegal shooting, lack of food, clashes with electricity lines. Most significant are the decrease of cattle (especially after 1985-1989), placing poisonous baits and the worsening of the habitats as a result of mining activities, forestation, disturbance, etc. Since 2004, 40 wind turbines have become a threat in Greece near the Bulgarian border, in a region where the birds pass. As a result of the targeted efforts of the teams of Green Balkans, FWFF and BSPB, the species has been successfully restored as a nesting species in the Balkan Mountains of Bulgaria and Kresna Gorge. In 2016 for the first time a total of 5 chicks fledged from the new colony in the Eastern Balkan Mountains, while in 2017 a total of 12 pairs were confirmed as breeding, at least 8 of them laid an egg and a minimum of 4 chicks fledged. At the same time, yet another colony was established in Vrachanski Balkan (Western Balkan Mountains), where in 2017 a total of 13 breeding pairs were confirmed and a total of 8 chicks fledged successfully. These incredible results were achieved through two main projects – Vultures Return to Bulgaria LIFE08 NAT/BG/278, which ended in June 2016 and LIFE for Kresna Gorge LIFE11 NAT/BG/363, which ended in November 2016.

There is an on-going project Bright Future for 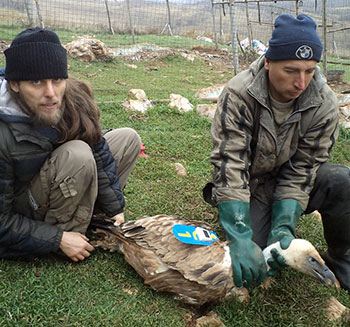 Black Vulture LIFE14 NAT/BG/649, which is focused on concrete conservation actions and restoration of the Black Vulture. There is also a LIFE RE-Vultures - Conservation of Black and Griffon vultures in the cross-border Rhodopes mountains Project LIFE14 NAT/NL/000901, aiming at reducing acute threats to Black and Griffon Vultures and thus allowing them to recover in the Bulgarian/Greek cross-border area of the Eastern Rhodope Mountains. It is a conservation-oriented project with a regional impact, ran in several Special Protected Areas within the Natura 2000 network. Our proposal will therefore enhance the awareness and information on a national level, multiplying the effects.
Especially considering a recent massive poisoning incident in Kresna Gorge, which killed about 30 Griffon Vultures, it is clear that the species need more targeted awareness and information efforts.