The Pygmy Cormorant was selected as a target species as it suffers from undeserved black image, planted by fishermen and fish breeders. Raising public awareness is crucial for its conservation.

In Bulgaria it is considered Endangered EN, 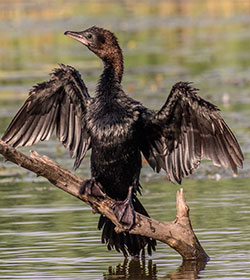 listed in Annex II and III of the Biodiversity Act.
In the past it mainly bred along the Danube valley and the Black Sea coast. It was found incubating in Mandrensko Ezero lake and in Burgas Lake. At present it breeds on the Danube islands Malak bliznak, Tsibar, Kalnovats, Mishka and Bezimen, where 6 colonies have been found (73 pairs). The most stable habitat is Srebarna Lake with 147 pairs at the average. It breeds very rarely along the Maritsa River. The total numbers are between 100 and 500 pairs. Until the 1980s, Bulgaria was in the periphery of the winter area and the numbers of the wintering birds were under 500 individuals. In 1982-84, its shift to the Balkan peninsula started, with the valley of the Maritsa River as a centre: 5 030 and 6 950 wintering individuals. In 1997 the formation of a new wintering site started in the region of the Burgas lakes: 6 850 individuals in 2000. In the 1995-2000 period, the average winter numbers varied from 7 000 to 13 000 individuals (Red Data Book of Bulgaria).

It is severely affected by destruction and degradation of habitats in the valleys of the Danube and the Maritsa; direct killing in the region of the wintering sites in the valley of the Maritsa; disturbance during the breeding period.
Although hunting of this endangered species is absolutely prohibited by the Bulgarian legislation, cormorants are viciously persecuted by poachers and fish-farm owners, accused of causing big damages together with the Great Cormorant. Besides direct shooting, permanent disturbance and persecution at the night roosts also cause death of numerous birds, as they cannot rest properly. These unfavorable factors are particularly aggravated in cold and snowy winters, in foggy weather and snowstorms, when the visibility is poor and food is hard to find. In this critical period, the big flocks of cormorants need a safe place to roost and feed.

At the time of the submission of the current proposal, there is no target funding for continuing the awareness and information efforts.